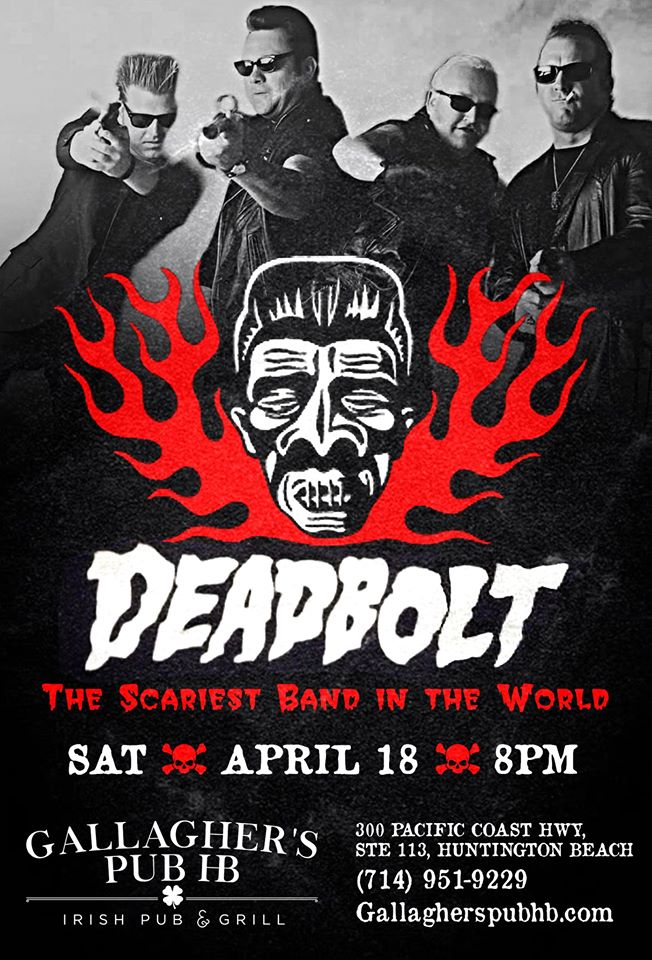 Deadbolt™ is a rock band from San Diego, California, U.S.A.. They describe themselves as "The Scariest Band in the World." The band often features two bass players, who are called "The Wall of Thunder."
The band originally formed in 1988 as a trio, featuring guitarist and vocalist Harley Davidson, bassist and vocalist Robert "RA" MacLean and drummer Les Vegas. Vegas and MacLean eventually left the band. Vegas' departure is chronicled in the song "Po' Boy" on the album Hobo Babylon. The other current member of the band is bassist Gary "3rd Degree" Burns (part of the band's "Wall Of Thunder") and drummers Tank Johnson or Bad Time Charlie. Sometime members of the band include The Phantom (bass) and Scary Potter ( drums)
Deadbolt's music combines surf rock, goth, psychobilly and blues sound with unusual and offbeat lyrics, a style the band dubbed "voodoobilly." Besides the release of several CDs, the band has toured both North America and Europe extensively.
The band is known for its use of power tools during their live sets, and it is customary to be showered with sparks of red-hot metal during their live shows.
Three members of the band were also in a short-lived offshoot group called The Strangers 1800, which performed music from Spaghetti Western films and TV westerns and released one EP, When Men Were Men and the Sheep Were Scared.